Launched this week during the 16 Days in WA campaign, the local water provider is asking customers to donate new and unopened school stationery, backpacks, lunch bags and reusable bottles in the large marked donation bins at its Administration Building at 1 Fairbairn Drive, Busselton.

Busselton Water Managing Director, Chris Elliott said he hoped the donations would provide tangible support for local children in need and make the start to the new school year a little easier in difficult circumstances.

“We’re asking our customers to donate whatever they can – be it a packet of pencils or an entire school kit in a backpack. Every little bit helps and makes a big difference to the women and children at Tuart House.

“Violence against women is a significant issue in Australia – the statistics show that approximately one in every four Australian women has experienced at least one incident of violence by an intimate partner.

Busselton Water is committed to making a difference wherever we can.”

The launch of the donation drive coincides with the 16 Days in WA campaign, which kicks off today (25 November) and runs until 10 December.

Communicare’s CEO, Melissa Perry, expressed that the organisation and its families are always grateful for the support offered by the local community.

“The donations made by the public will make a very real difference to the lives of women and children who have experienced family and domestic violence.”

“We are so grateful to Busselton Water for its support and in joining with us to increase awareness of the impact family and domestic violence can have on women and children,” said Ms Perry.

Donations can be dropped in the marked bins at Busselton Water before Friday 17 January.

About 16 Days in WA campaign

The McGowan Government’s annual 16 Days in WA to Stop Violence Against Women is Western Australia’s contribution to the international 16 Days of Activism Against Gender-Based Violence campaign.

The campaign runs from 25 November (International Day for the Elimination of Violence Against Women) to 10 December (Human Rights Day).

This year’s 16 Days in WA theme is speak out to stop violence against women. 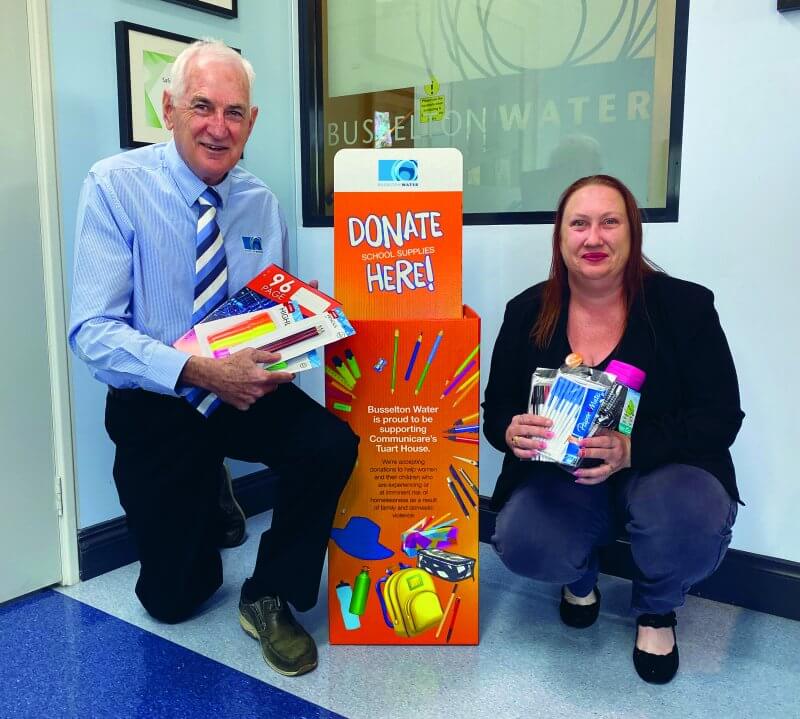