One of the biggest solar panel installations of its kind within the City of Busselton has commenced with local water authority Busselton Water installing more than 300 solar panels at its Water Treatment Plant 2 operations.

The solar panels are expected to save the corporation almost $40,000 ex GST each year in electricity costs and will significantly reduce its carbon footprint.

Busselton Water CEO Chris Elliott said when the Board assessed the environmental and financial benefits from installing solar panels, it was a logical decision to make.

“We’ll be reducing our carbon footprint by offsetting approximately 15 per cent of our power use each year – or 142.69MWh annually,” Mr Elliott said.

“That’s the carbon dioxide reduction equivalent of taking 21 passenger cars off the road or recycling more than 30 tonnes of waste and with the declining cost of the technology, we estimate we will recoup the costs of the solar panel installation in less than four years, considerably less than what would have been expected a number of years ago.”

WA Alternative Energy Director Simon Barclay said while the company has completed installations of this size elsewhere in the South West, the Busselton Water job is its biggest in the City.

“Just to give you some idea, an average sized house will usually require a 3kW solar system – Busselton Water is installing a 100kW system,” Mr Barclay said.

The installation involves 303 panels across three buildings and will take nearly four weeks to complete.

“Our team will also trench significantly across the yard to connect all three buildings to a central system, as well as provide extra grid protection and upgrades to the electrical system to be able to incorporate solar energy. Plant 2, located on Queen Elizabeth Avenue, is one of three water treatment plants operated by Busselton Water, supplying 63% of Busselton’s water.” 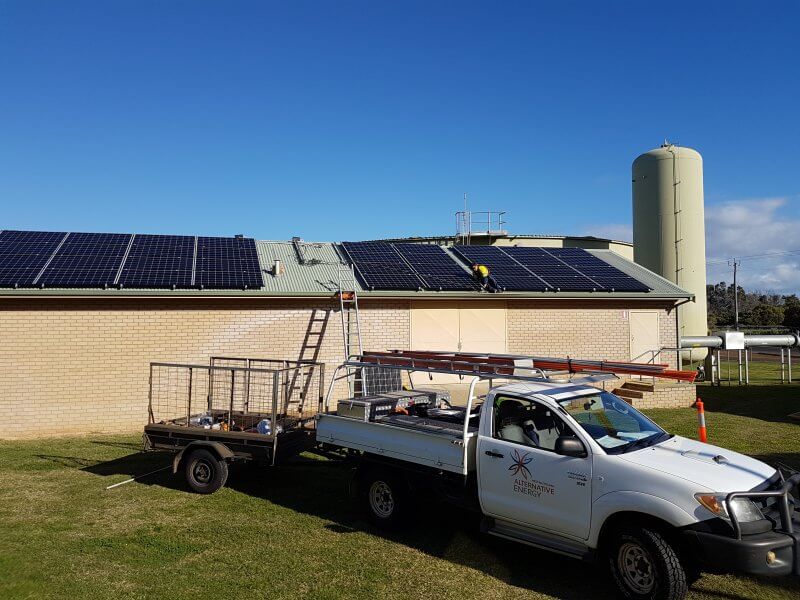