The power of groundwater

For six years, the Busselton community has been able to enjoy warm temperatures in the pools at Geographe Leisure Centre thanks to a project which takes advantage of the heat generated when we extract groundwater for the region’s drinking water supply.

Busselton Water’s Managing Director Chris Elliott explained that the natural heat of groundwater when extracted from the deep aquifer is around 34 degrees.

“Rather than wasting this energy source, the heat is captured and stored in water storage tanks at our Queen Elizabeth Avenue Water Treatment Plant before being transferred 700 metres down the road to the Geographe Leisure Centre,” Mr Elliott said.

“If you’ve attended one of Busselton Water’s plant tours, you would have been able to touch the outside walls of our storage tank and feel the heat it omits before it’s transferred.”

The technical heat exchange system consists of various pipeline loops which ultimately result in some of the heat being removed from drinking water before it’s distributed to customers.

This heat is transported to the Geographe Leisure Centre via an underground insulated pipe loop before being transferred to the filtration system for the swimming pool water. The three-loop feature of the system was designed to ensure no risk of contamination of water.

City of Busselton Senior Sustainability and Environment Officer Mathilde Breton expressed how integral the project has been over the past six years and the difference it has made.

“The project, a first of its type in Australia when it was completed in early 2014, has seen a wide range of benefits for the City of Busselton and Geographe Leisure Centre including the opportunity for the outdoor pool to remain open all year round instead of closing during winter,” Ms Breton explained.

“The outdoor pool remaining open over the colder months provides the community with more opportunities to stay active and has seen customer satisfaction increase significantly.”

There has also been a positive environmental difference with a 50 per cent reduction in electricity usage at the Centre in the first year alone.

The project was also recognised as a winner of the WA Infrastructure Innovation award at the 2014 WA Water Awards. 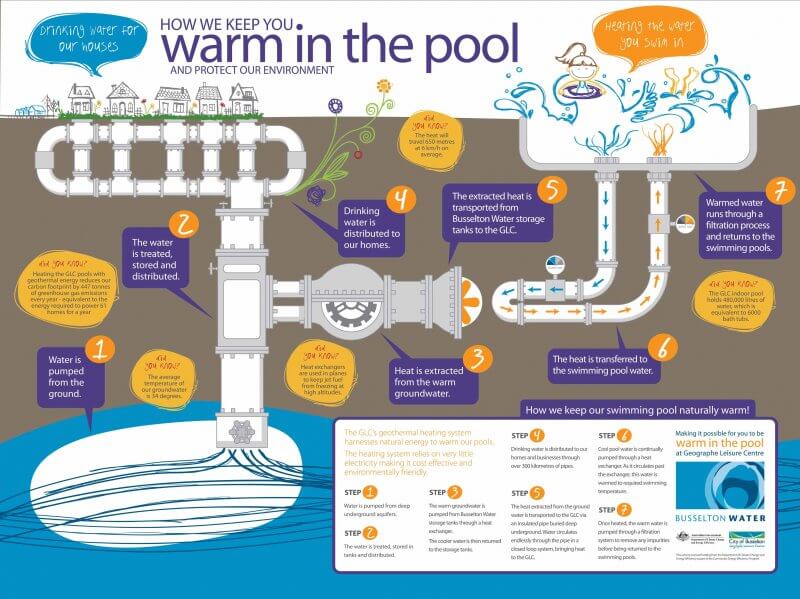